You are here: Home / Lifestyle / Beijing after the Olympics, is still wonderful

The best time to visit Beijing is now ? Cheaper hotels, less traffic, nicer weather. There is also an opportunity to get a sense of the Olympics before it?s too late.

The Old Beijing vs The New Beijing

The first time my husband and I were in Beijing was 1981, three years after China normalized its relations with the U.S. Huge propaganda billboards were erected everywhere with militant images of soldiers, workers and farmers. Red guards occupied the city.

People were poor, skinny, joyless, and passive. The buildings were old and dirty. There were no taxis, just public buses jammed full of passengers blocking the door, not letting it close.

I was sad. I remember asking myself, ?When will China rise again??

A modern capital city has emerged before my eyes. We were there late October. It doesn?t look like the Beijing I toured 27 years ago. All the propaganda was gone. The only government advertisement was about the Olympics ? ?One world, one dream.?

From the modern airport to the tourist-packed Tiananmen Square to the high-rise condominiums to the glamorous financial district, Beijing has been transformed with signs of prosperity and progress. The middle of the freeways is often lined with beds of flowers in pinks, yellows, oranges and purples. Trees green in lots big and small, making the city beautiful and fresh.

All state-owned media organizations including print, television and radio have their own landmark building, each with 20 to 60 stories, defining the city?s landscape. China?s Central Television even possesses its own Space Needle, a revolving tower with restaurants and an exhibition hall. Another building looms over it like a pair of pants.

Over 70,000 taxi are now rolling around in the city. With only $2 renminbin (50 cents USD), you can ride the subway to anywhere, even the farthest part of town. My husband and I preferred the taxis though, for convenience?s sake.

What is challenging for tourists in Beijing is that it is hard to get accurate information. The government does not release its information on Web sites. Additionally, the hotel?s concierge was no help when we asked about the Olympics facilities.

My husband and I decided to try our luck by ourselves. We took a 10 minute taxi ride from our hotel to the Bird Nest($2 USD), the stadium where the elaborate opening ceremony of the Olympics was held. We did not know whether the stadium was open to the public. There were crowds, mostly Chinese from all over the country, hovering around the site like bees around a hive, beaming with pride, busily taking photos with family and friends. 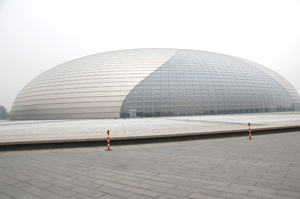 The stadium reopened Oct. 1 to tie in with the celebration of the founding of the People?s Republic of China.

There were no directions posted telling us how to get tickets. We searched around and found a small booth wrapped with steel bar on all four sides, displaying a small sign: ?temporary office.?

Somehow people knew it was the ticket office. They slipped in $50 renminbin ($6 USD) and the person inside would hand the purchaser a ticket.

A security screen was set up at the entrance. However it was more a symbolic than an effective monitoring device. The guards tried to push everyone in as fast as possible to avoid lines outside the stadium.

What can I say about that spectacular stadium? Thousands of brains must gone into the project. On the ground, over 50 sets of costumes used for the Olympics ceremony were displayed.

The next day, we were treated to a water, light and music show at the Water Cube, the swimming pool where Michael Phelps made history by winning 8 gold medals. We bought the cheapest kind of tickets from a ticket window close to the stadium at about $35 USD a ticket.

With only half of the seats filled, we moved to the front, to the most expensive seating section. To my surprise, none of the ushers stopped us. The pool was set up with synchronized light and water movements that reminded me of Las Vegas?s own water and music shows. The difference is that the stadium?s program presented a live orchestra playing European and Chinese symphonies with dancers from the Beijing Dance School performing on both sides

These costumes (left and right photos) were worn during the Olympics opening and closing ceremony, inside Bird?s Nest Stadium.

The orchestra?s performance was delightful. However, I thought the Irish river dance and tango dancers lacked skills and polish. One dancer even fell because the pool was too slippery, but she quickly got up and regained her posture.

I instantly spotted the No. 7 water lane where Phelps and his team won, the images still vivid in my mind. The other pool inside the hall was where the divers competed. Dividing the two pools was the floor space for the award ceremonies for the winners and where the orchestra performed. Next to this hall was another small pool, which I assume would be for smaller event. Plans for developing Olympics stadium areas into condominiums and malls are now underway. That?s why we wanted to visit the Olympics site before it would be converted to something else. ♦

Assunta Ng?s travel column will be continued next week.

Assunta Ng can be reached at assunta@nwasianweekly.com.