You are here: Home / Lifestyle / Not just for kicks

Take a stroll on East Pike Street in Capitol Hill and one might walk right on by the Rock Paper Scissors store with its nondescript facade. The face of this business may be understated (with only a logo indicating its existence), but the heart and vision that lie within the storeowners radiate more than any neon sign.

Of course, the shop may be more conspicuous on some days, when a line of fervent sneaker enthusiasts have formed down the block in anticipation of limited edition shoe styles.

Partners Nathan Young, Bruce Yan, Chikara Sugiyama, Joe Nguyen and Adrien Lo came together with a common dream. “We wanted to open up a shop … to represent our culture. Bruce and Nate are designers who wanted an outlet for their creativity (and) to turn a hobby into a career,” said Sugiyama, whose dream came to fruition when doors opened on June 14.

The culture is that of the underground hip-hop and sneaker world, which encompasses “not just shoes and clothes but also art, music, dance and expression,” says Lo. All of which, Rock Paper Scissors intends to weave into the content of their store. 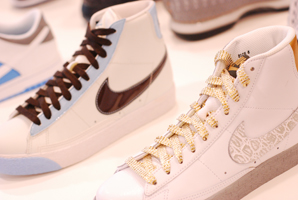 Each part of the store name reflects a portion of this sentiment, with “Rock” representing objects they hope to sell in the future such as accessories and toys, “Paper” signifying art books and artist collaborations and “Scissors” symbolizing the cut and sew clothing brands they carry.

The hip-hop lifestyle has been culturally recognized all over the world for years. But since “Seattle is always a couple years behind the fashion capitals (such as) Tokyo or New York, we want to push all new trends in Seattle. Get the city closer to that level,” Sugiyama said.

One way they intend on doing so is by “trying to blow up Pike Street,” said Sugiyama. The RPS team wants to create a row in Seattle that is comparable to the Haight and Ashbury of San Francisco or the Fairfax of Los Angeles. Both reference streets in their respective cities, where a strip of booming independent street wear shops can be found. Small eclectic businesses dot the area with a modern appeal and reflect a high-end urban feel.

Sugiyama mentions that the emergence of boutiques like Winner’s Circle, Goods, Laced Up and 35th North have already called attention to the Pike Street area. He also refers to Sal’s barbershop and The War Room, Havana, Neumos and Chop Suey night clubs as all contributing greatly to promoting awareness for Seattle. “Pike Street is well on its way to being world known,” said Sugiyama.

Additionally, the cohesiveness of the community is an imperative part of this process. Building relationships with other businesses creates a supportive alliance, one that forms an environment where storeowners are welcomed into each other’s stores, keep one another updated and cross promote for one another.

Whether or not these shops have the same vision, the guys at RPS are all about being supportive of their counterparts. This all-inclusive frame of mind is carried over into their customer care as well. Rather than merely finding a size or ringing up a transaction for their clients, the sales team attempts to provide more support.

“We push ideas, what works for the customer. People come in and see bright colors (on shoes) but they also need to see how it all pulls together, not just by matching colors,” says Sugiyama.

RPS carries over 100 different styles of Nike sneakers including their top sellers: Retro Jordans, Dunks, Air Force Ones and Air Maxes. A selection of Converse can be found among other brands such as The Hundreds.

They are exclusive carriers of their own Rock Paper Scissors brand T-shirts and New Era caps (sold out at the moment). Select high-end lines such as Japanese brand Kiks TYO and Twelve Bar are available, while Starter (Black Label) and Staple collections are to come. ♦

For more information and updates on the Rock Paper Scissors store, visit RPSlife.com.

Jacklyn Tran can be reached at info@nwasianweekly.com.