You are here: Home / News / Take the road less traveled

Alvin Wong gets the Earthwalkers logo painted on his face by professional Malinda McDonnell, Aug. 28. (Pictures provided by Caroline Li)

On a warm Thursday night, Aug. 28, a dimly light Toi club was abuzz with unexpected conversations. Amid the happy hour well drinks, unlikely people from all walks of life gathered in celebration of the party’s occasion, the one-year debut of Earthwalkers Magazine.

About 150 people were formally invited, said Earthwalkers founder and party hostess Caroline Li, with additional drop-ins coming from two local hostels. Li said she wants this party to be the model for other Earthwalkers events around the country, where local clubs not typically tourist attractions, much like Toi, can be a gathering place for the magazine’s followers.

“Earthwalkers are people who take ‘the road less traveled,'” she said. While fellow writers and travelers networked, another goal of the party was to raise funds to start paying some of its writers.

“In order to get good writing, you have to pay the writers,” said Li. “Writers have been exploited for too long.”

A freelance reporter herself, Li’s background in writing gave her important insight when it came to starting a magazine.

Based out of Seattle, the grass roots Earthwalkers Magazine – presently only available online – showcases an array of topics, from featured in-depth tories to book reviews to short stories.

Though the topics may bring to mind other travel-oriented magazines already on the market, Li said Earthwalkers is much different. “You won’t find our stories in Seattle Metropolitan. It’s not going to be fluff stories,” she said.

Half-truths are hard to come by, considering Earthwalkers’ zero policy on censorship. “I believe in hardcore journalism ethics, I would never censor a writer for the sake of advertising and affect the integrity of the piece,” she said.

Instead, Li chooses to rely on informally styled stories, many written in the first person voice to add “insight while remaining educational.”

“I wanted the Web site to be a MySpace meets nytimes.com,” she said.

At the moment, Earthwalkers has about 200 registrants on its Web site, Li said. It’s an enrollment number she’s proud of, considering the marketing team consists of Li working on the Web site during non-work hours at her full-time marketing agency job. 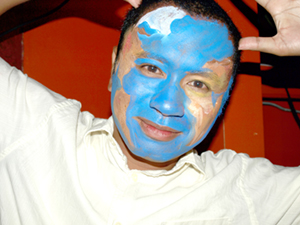 One of the major influences to start Earthwalkers also came in the form of a story. While on a reporting assignment, Li interviewed the prince of Cambodia and asked him, responding to the country’s tourism expansion, how foreigners could be more respectful to Cambodian culture.

“He said, ‘The number one thing is for people to educate themselves before they come here,'” she said. Having backpacked through Southeast Asia and Hong Kong, she has had a chance to appreciate varied cultures.

“It’s insulting to a local culture when tourism comes into their city because they don’t want to compromise their traditions,” she said.

By seeking stories from local writers, Li said she hopes it will give people a truer sense of culture and place. It’s an ethos echoed closely by attendees of the event.

“I like the idea of conscious traveling,” said Mindie McDonnell, a volunteer face-painter at the event. “We’re uglier Americans (politically) than ever before, and it’s really important we travel to see how the rest of the world works.”

Attendee Noah Davis agreed. “I relied on Lonely Planet a lot when I traveled, but it’s since become too corporate and most of the attractions are wrong, out of date or too popular. Earthwalkers is real people, traveling,” Davis said. Having trekked through most of the continents, he said the publication was a great idea as Earthwalkers’ articles will be an important aspect in figuring out his next travel destination.

While the event marked the one-year anniversary of Earthwalkers, Li has many more plans for the future of the publication. She said she hopes to start working on a print edition of Earthwalkers soon.

In the meanwhile, she’d like to see more registered on the Web site and develop a further sense of online community. “Earthwalkers has an alternative lifestyle. There’s no age bracket as it’s a way of living that isn’t limited by age or any other demographic,” she said. ♦

Amy Phan can be reached at info@nwasianweekly.com.