You are here: Home / News / Asians come together to empower

Looking for something to do the weekend of Sept. 26? It may be a little difficult to choose between the National Federation of Filipino American Associations’ (NaFFAA) 8th Empowerment Conference and the Korean American Coalition (KAC) 6th Annual National Convention, which begins on Thursday, Sept. 25. These conventions are to be held at the Westin Hotels in Seattle and Bellevue, respectively.

Neither party considers the shared date an issue. “Typically our primary audience have been Korean Americans, though it is definitely open to other APIs,” said Kim. Myrna Victoriano, a member of the committee of the NaFFAA’s conference said, “We have a different audience. Most of our attendees are Filipino. But we would like to cater to everyone also.”

Kim did mention that the one slight snag KAC ran into with NaFFAA was a conflict with getting a certain sponsor.

The theme of NaFFAA’s conference this year is: How to Forge a New Filipino American Agenda for the 21st Century. One of its goals is to promote the welfare and well being of Filipinos and Filipino Americans by discussing how Filipinos can anchor their contributions to society to benefit not only Filipino communities, but also all communities. 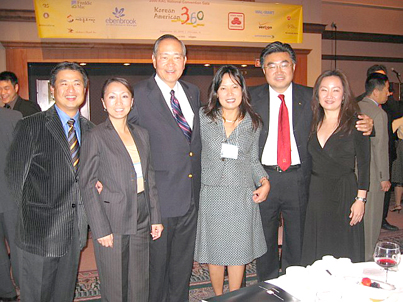 One particular highlight of the event will be Philippine President Gloria Macapagal Arroyo’s delivery of the keynote address at the conference gala on Saturday, Sept. 27.

Arroyo, 61, was sworn into the presidency on Jan. 20, 2001, after many years in politics. Her presidency has been tumultuous and controversial, though not many doubt her power and influence. She was one of Forbes’ 100 Most Powerful Women in 2006 at number 45.

The KAC’s convention is no less impressive. “The goal is bringing together our community to talk about pertinent issues,” said Kim. In addition to the many speakers like Justice Ronald Moon and former “Apprentice” finalist James Sun, the KAC’s convention also has various seminar sessions.

Kim said that the demographic of the KAC’s conventions are usually people between ages 20 to 40. There are a lot of 1.5 generations and second generations.
“I think this is definitely a great time to see the broad spectrum of issues that not only involve Koreans, but also the greater API community. Many of us can identify with a multi-ethnic perspective on stuff.”

Kim also made note of the fact that what is unique to the Northwest is that, compared to other areas of the country, the relationship between first and second generations is much better. “Other chapters have less of a first generation crowd,” Kim said. “We want to showcase that uniqueness and the tie that we have. We’re united with our experiences.”

Though both conferences are offering different speakers and different topics, they both share a mission. That is to empower Asian Americans. ♦