After 80 years full of changes, this is how Uwajimaya's flagship store in Seattle stands today.

“You do it every day because it’s the right thing to do.”

This is what former CEO of Uwajimaya Tomio Moriguchi said when prodded about the store’s upcoming 80th anniversary celebration. Though he prefers to step back from the limelight, Uwajimaya’s legacy and impact on the ID is undeniable to many.

One promotion for the anniversary is the sale of a commemorative cookbook, which will feature recipes from the Moriguchi family and celebrities like Apolo Anton Ohno, Edgar Martinez and Kenny G. Net proceeds will be donated to the American Diabetes Association.

Moriguchi was CEO from 1967 to 2007. These days, his youngest sister Tomoko Moriguchi Matsuno is at the helm of Uwajimaya Inc. Uwajimaya hasn’t always been the thriving business that it is today.

“We started in Tacoma,” Tomio Moriguchi said. In 1928, his father, Fujimatsu, sold homemade fishcakes out of the back of his truck to Japanese laborers working in logging and fishing camps in the Puget Sound. The business was named after the town where he learned the trade – Uwajima.

“In a family business you start out supporting each other to make life easier,” Moriguchi said. “Parents don’t tell you they love you but you know that everything they do is for their children.”

Shown is one of the previous Seattle store signs

Uwajimaya was in Tacoma until the U.S. entered WWII. “My father lost his business in 1942,” Moriguchi said. “About 120,000 people – 50,000 families – were ordered to leave with what they could carry.” The Moriguchi family was sent to the Tule Lake Internment Camp in California.

“My father said, ‘To hell with it. I’m taking my family back to Japan!’ Thank goodness he didn’t though.”

Moriguchi was a young boy when his family was interned at Tule Lake. Even then, he knew the stress his mother, Sadako, was under in stretching out what savings they had when the future was so uncertain. “When they put us into that prison,” he said, “they didn’t tell us how long we’d be there. That was unfair. That’s very cruel to put people in that position. They didn’t tell you what you did wrong. Once the war was over, you got $25 and a train ticket home.”

His father restarted Uwajimaya in 1946 in Seattle with $400. Nihonmachi and Chinatown was decimated. “I remember being 10 years old looking for businesses for my family,” Moriguchi said.

Moriguchi described a Filipino grocer who had been convinced that a depression would come – as they often do after wars. “No one thought the economy would boom,” Moriguchi said. “My dad asked if he would sell his store. The man practically threw the key at my dad and said, ‘Take it over.'”

From there, Uwajimaya became a real family business. Perhaps unique to the Moriguchi family, Fujimatsu didn’t put pressure on his children to continue the family business. Six of his seven children went to college.

His father passed away in 1962. This led to Moriguchi’s more hands-on involvement in the family business. “My mother and oldest brother (Kenzo) were working so hard,” he said. He was an engineer at the time. “I looked at my mother one day, and she was a wreck. So I left Boeing.” 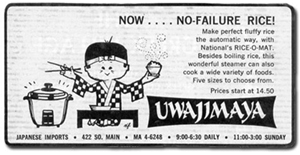 Moriguchi modestly attributes the success of Uwajimaya in his 40 years as CEO to “the stars and moon” aligning. What also helped were the 50,000 war brides that came in from Japan post-WWII. “War brides were very good customers,” he said. “The other day a lady came up to me and wanted me to meet her granddaughter because my father had been good to her family.” Businessmen and students also helped build up the clientele.

In 2007, Moriguchi retired and turned the business over to his sister, Tomoko, who previously had lived in the Bay Area. “She was the logical choice,” he said, stating that he sees her continuing the business for at least the next 10 years.

These days, Moriguchi serves as chair of the Uwajimaya board where he primarily focuses on the company’s real estate.

“My dad was convinced that young people would turn to hot dogs and abandon rice,” Moriguchi said fondly. This happens to be far from the truth, as evidenced by the booming business today. ♦

For more information on Uwajimaya and to learn more about their anniversary promotions, visit www.uwajimaya.com.